Karen Holford
ACW is my driving service of choice. I travel regularly and I appreciate their attention to detail and care. Tony is always punctual, caring, and I enjoy being driven by him. He is a careful driver, knows great shortcuts and has a fun sense of humour. When I am with Tony I know I am in good hands and that takes the stress out of travelling.
Marcus Flint
I have used Tony and ACW regularly for business and holiday work for 27 years – right from his starting the company, and I think this speaks for itself.

Working in the Oil & Gas industry until very recently, I have had to travel all over the world and it has always been a relief to know that ACW is always there to take me to the airport and to pick me up again. In fact, I can only think of one time in all these years when he (or one of his drivers) has been late, and that was due to a number of external factors coinciding on the day; and only one occasion when I missed a plane, and that was my fault - I overslept!

Tony’s meticulous attention to detail means that he knows all the designated ‘London’ airports inside out (where to park, where to wait, which flights leave and land at which terminal, best alternative routes when the M25 is at a standstill, etc.) and this has helped to make the transfer process as painless as possible: he is very customer focused, patient and considerate. When I have had to leave a message regarding short notice bookings or flight re-arrangements they have always been responded to promptly.

On occasions, I have used ACW to arrange group travel for business executive colleagues from central London to places such as Reading and Blackpool (heliport) and he and his driver associates have always delivered. Indeed, all the drivers he has used, whether employed directly by ACW or (at busy times) outside contractors, he has known personally and they similarly have been effective in their work.

Tony himself is a good driver, always cheerful, interesting to talk to and has a great sense of humour. My family and I will continue to use ACW and recommend the company to others.

A long and winding road

I wouldn’t normally do this kind of thing but…I’d like to make a recommendation and tell you a story about a friend of mine. Tony Walker runs his own small executive chauffeur business, ACW, and I have been using him for over a decade now for both business and personal trips. He’s professional, reliable and drives safely and smoothly.
Here's his website.

Nothing unusual about that, except that Tony has cerebral palsy. This affects his ability to walk and speak and his manual dexterity, amongst other things. It also means that life has always posed very considerable challenges for him. From a young age, he had special schooling and many of his friends ended up in homes performing menial tasks, and the same was expected of him. But Tony didn’t like that script – he is an incredibly stubborn man who refuses to be told that some things may not be possible for him. He wanted to be independent and to set up his own business. He also loves cars (quite a petrolhead in fact). So what could be easier or better, for someone who can’t walk easily, talk normally or hold things properly, than to set up his own chauffeuring business and persuade people to let him drive them?

Which is exactly what he did. And of course he even successfully completed an advanced driving course. He built up a good business and at one stage had a lovely Audi A8 (his pride and joy), a Mercedes and a Viano. The picture above is from his website - see if you can spot him hiding in the background.

I have witnessed at first hand how difficult many things are for him, and some of the indignities he has had to endure. Some have been tragi-comic like the time he picked up my wife and I from a nightclub, and a passer-by who had seen him walking to the car tried to physically haul him out of the driver’s seat screaming at him that he couldn’t drive as he was drunk. Inserting car park tickets into the exit barriers at airports, placing small coins into tiny baskets at barriers, reaching up to press the boot-lid close button without falling over, walking in high wind or snow, inserting the car key etc., all pose challenges. But you would never tell it from him. The guy never complains about anything, is always smiling and always finds something to laugh about.

But then he had a bad fall in 2014. What at first seemed remediable with an operation and some physiotherapy turned into a nightmare. The hospital treating him told him he would never walk again, and would obviously never drive again. They recommended he go into a wheelchair for the rest of his life, and very probably a home. His objections fell on deaf ears. Even his parents admitted defeat.

But they all underestimated Tony. His stubborn nature, unfailing optimism and incredible drive meant that he spent 3 years trying everything possible to get back on his feet and back into his car. With unbelievable dedication, hard work and painful physiotherapy, he finally managed to get himself fit and licensed to drive again and went back on the road in 2017.

However, his business suffered considerably from his 3 years’ absence and he had to give up two of his cars (including his prized A8) and let his other drivers go. He is now getting by, but the business is at a vulnerable stage and would really benefit from a boost. I worry (although Tony probably does not) that there is a risk that this man, who has worked so hard all of his life to overcome the obvious difficulties of his cerebral palsy, earn his own living independently and not fall back on the State, may lose his business.
So if you ever need a car to/from the airport or station, or a business event or trip, or even just a car home from a night out, I would recommend you consider Tony.

Tony is a lovely guy with a great sense of humour, and cheaper than a black cab. With our support, he can get his business properly back on track and who knows, maybe we can help him get back his beloved A8.

This is him with it, taken 10 years ago, at a track day bought for his 40th birthday. 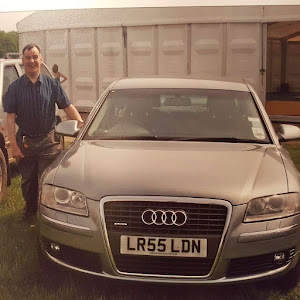 And this is him as a passenger in his ultimate dream machine, an Aston Martin. That smile didn't leave his face for a week! 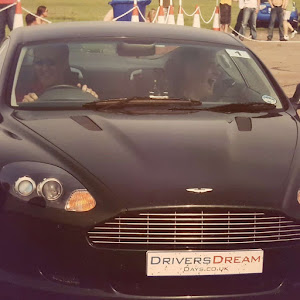 Thank you for reading this and, if you wish, sharing it.
Chris Georgiou